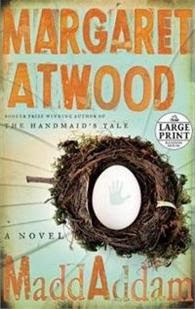 
From the Publisher
Months after the Waterless Flood pandemic has wiped out most of humanity, Toby and Ren have rescued their friend Amanda from the vicious Painballers. They return to the MaddAddamite cob house, which is being fortified against man and giant Pigoon alike. Accompanying them are the Crakers, the gentle, quasi-human species engineered by the brilliant but deceased Crake. While their reluctant prophet, Jimmy -- Crake's one-time friend -- recovers from a debilitating fever, it's left to Toby to narrate the Craker theology, with Crake as Creator. She must also deal with cultural misunderstandings, terrible coffee, and her jealousy over her lover, Zeb.
Meanwhile, Zeb searches for Adam One, founder of the God's Gardeners, the pacifist green religion from which Zeb broke years ago to lead the MaddAddamites in active resistance against the destructive CorpSeCorps. Now, under threat of an imminent Painballer attack, the MaddAddamites must fight back with the aid of their newfound allies, some of whom have four trotters.
At the centre, is the extraordinary story of Zeb's past, which involves a lost brother, a hidden murder, a bear, and a bizarre act of revenge.
Combining adventure, humour, romance, superb storytelling, and an imagination that is at once dazzlingly inventive and grounded in a recognizable world, MaddAddam is vintage Margaret Atwood, and a moving and dramatic conclusion to her internationally celebrated dystopian trilogy
--------------------------------
Smell The Book Review
8 out of 10

I've always been a fan of dystopian settings. Curious to see how various authors believe the end of world will come about, and what it will look like in the aftermath. Ms. Atwood's vision is interesting in how she expands on the current real-world fascination we have with cosmetic alterations, the need for instand gratification of all wants and desires, being constantly connected via computers and social media and, of course, sex, and weaves it into a cautionary tale. Also, a common theme with many authors, how quickly the thin veneer of civilization is wiped away as soon as the power goes out and food supplies get low. The parts of the world we are able to see in this novel definitely show a pessimistic view of humanities chances.

There's always been something about Margaret Atwood's voice that has always drawn me in and MaddAddam is no exception. A fast-paced read that in this book, the third of the "Oryx and Crake" trilogy, mainly focuses on Zeb's history and his connection to Adam One and how he came to be part of the MaddAddamites.

If there is a flaw in the work for me, it's that it focuses too much on past events. Zeb is not an uninteresting character, but to focus on his background when I wanted to see more of the world around them, of the animals, of how the rest of the world was coping, was disappointing.

But overall a good book and a recommended read.