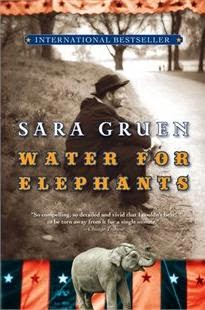 
The runaway international bestseller by "the must-read author of summer" (Ottawa Citizen)
Orphaned and penniless at the height of the Depression, Jacob Jankowski escapes everything he knows by jumping on a passing train-and inadvertently runs away with the circus. So begins Water for Elephants, Sara Gruen''s darkly beautiful tale about the characters who inhabit the less-than-greatest show on earth.
Jacob finds a place tending the circus animals, including a seemingly untrainable elephant named Rosie. He also comes to know Marlena, the star of the equestrian act-and wife of August, a charismatic but cruel animal trainer. Caught between his love for Marlena and his need to belong in the crazy family of travelling performers, Jacob is freed only by a murderous secret that will bring the big top down.
Water for Elephants is an enchanting page-turner, the kind of book that creates a world that engulfs you from the first page to the last. A national bestseller in Canada and a New York Times bestseller in the United States, this is a book destined to become a beloved fiction classic.
--------------------------------
Smell The Book Review
9 out of 10

Much hyped, and on my radar for a while, this book was selected by one of the regulars from the Ottawa Book Club. I am pleased to report that the book was hard to put down and was as excellent as I had heard and well worth reading.

I must admit I am a fan of the framing device Sara Gruen utilizes. It is a bit of a cliché but I enjoy the "90 (or 93) year old man relates a tale in his dying years that he has never spoken of before" type of thing.  Her shifts from the past to the present are well-timed and not an interruption of the main narrative (as sometimes happens in other books). The transitions helped me to care and sympathize more for Jacob than just the circus story alone would have done. I didn't sympathize for Jacob as a youth (though his early story is very compelling) but I did feel for him as an old man.

The book raised many questions. The main story deals with animal care in circuses as well as the young tumultuous life of Jacob whose world is cut out for under him by the death of his parents. Jacob, by accident, essentially runs away and joins a circus where he falls in love. The secondary story deals with the pain of growing old. Of losing the integrity of your own mind and memories. Of actually visiting with family members only to admit that you couldn't even remember who they were or how they were related to you. And as seems to be a common thread with stories of the elderly, the loss of dignity with getting names wrong, talking for long lengths of time and forgetting what you said, and being subject to the whims and direction of those around you that are more "mobile".

Several things resonated with me in this book. I have worked for decades in the veterinary field and enjoyed seeing the stories protagonist as a vet (or almost). His compassion for the animals, and anger at those that abuse them, mirrors my own. Jacobs reactions are our own which also generates more sympathy for him in my mind. Also, about 9 years ago, I owned a Jack Russell Terrier which reminded me very much of Queenie.

A thoroughly enjoyable read. Realistic character, realistic animals etc.  If I had any reservations about the book it is that it is yet another account of how horrible it seems to be to work for a carnival or circus! Recently I read Stephen King's "Joyland". Years ago I loved Robertson Davies' "World of Wonders". But they all seem to reveal that apart from the usual distain for the end customer that almost all businesses possess behind closed doors, these circuses and carnivals seem to be a focal point for drugs, abuse, cruelty and other such horrors. Perhaps that is the actual conditions of these businesses?

Jacob runs away to join the circus twice. Once as a young man and once at 93! An enjoyable tale and a highly recommended read.