An odd moral dilemma with this one.... Ironically enough with a classic epic that can be directly related to morals!

I wasn't wearing my glasses, I looked in the inner cover and saw $18.95. It's one of my favorites and $20 wasn't to much for a nice older version of this epic. I paid $18.95 (though thought this was an oddly specific price for a used book). The fellow behind the counter charged me $18.95. I checked with a friend of mine AND my wife who both said they wondered why it was priced at $18.95 after they looked in the front page.

Take a closer look... there is definitely a comma AFTER the 1 and before the 8. Did I pay $20 bucks for one valued at almost 2 grand? I looked up similar copies on eBay and other stores and the book does sell for a couple of hundred bucks elsewhere... is there something different about this edition?

But... in the meantime, I plan to enjoy owning what might be the most expensive book I've ever collected, even by accident! 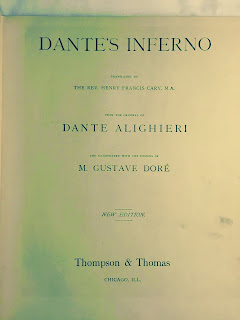 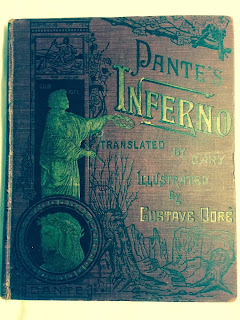 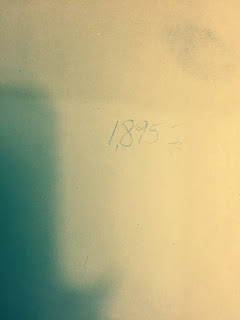 Another classic... this one I found near Quinte Ontario. Small little bookstore, cost me $29 but in great shape for being from 1913! 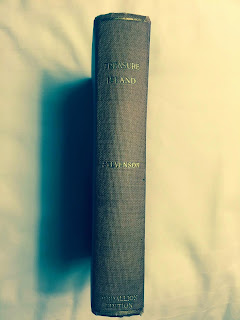 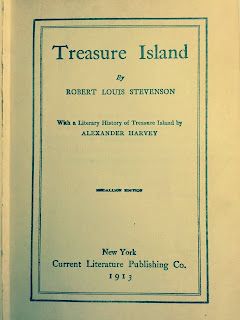 Posted by Unknown at 9:40 AM No comments:

I've never been a fan of re-gifting at Christmas until a few years ago....

For YEARS my mother in law in her house in Kingston had a selection of old Tennyson books as decoration in one of the guest bedrooms. I coveted those books and dropped many a hint for years... to no avail.

Then, one Christmas a few years back, someone thought it would be a good idea to re-gift something as one of the presents we each had to give someone else. I guess my Mother in Law picked my name out of the hat and for lack of a better idea she gave me the books!

There are 13 of them in all, in great shape, apparently known as the "Aldworth Editions" and are copyrighted at 1901. 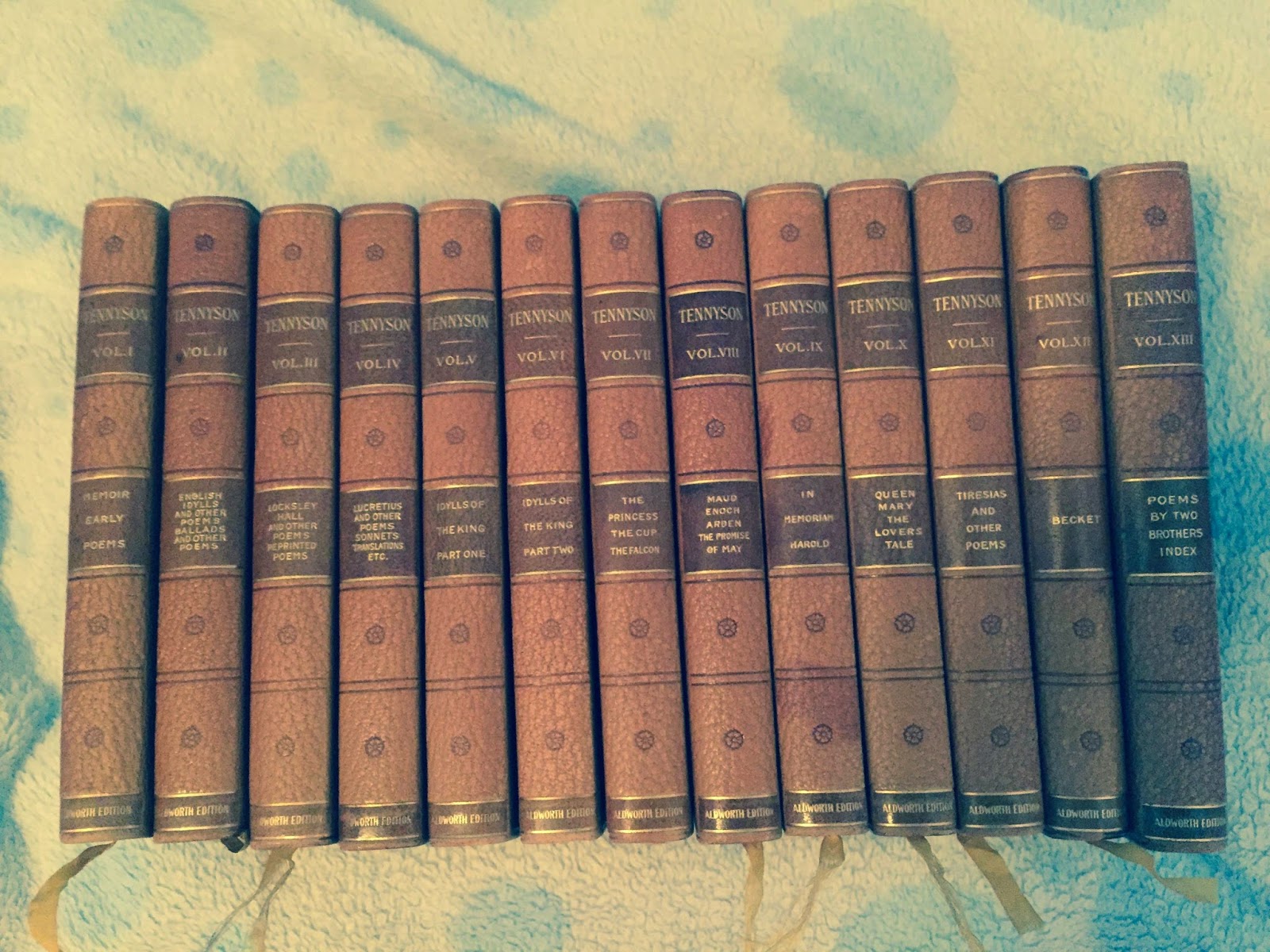 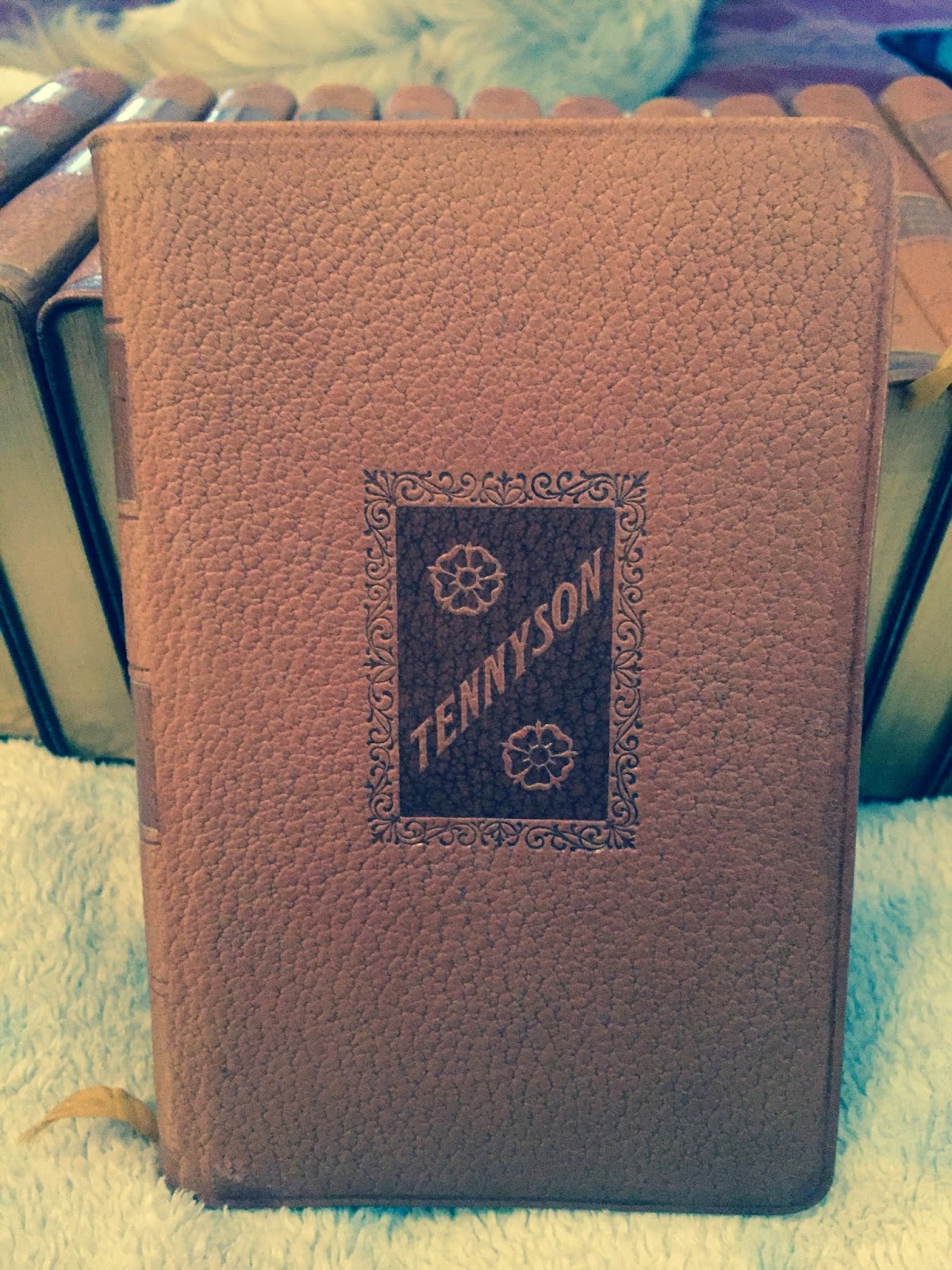 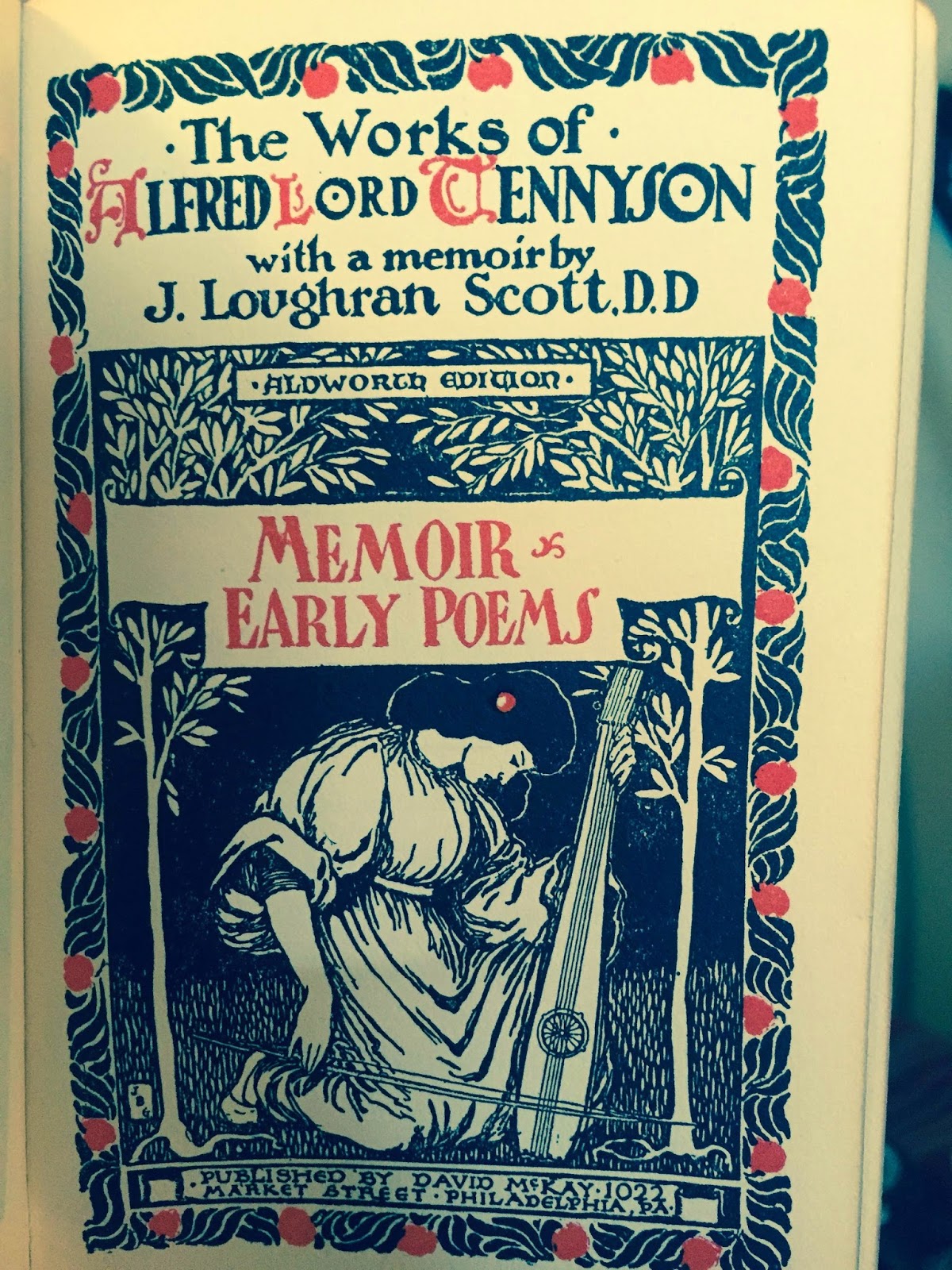 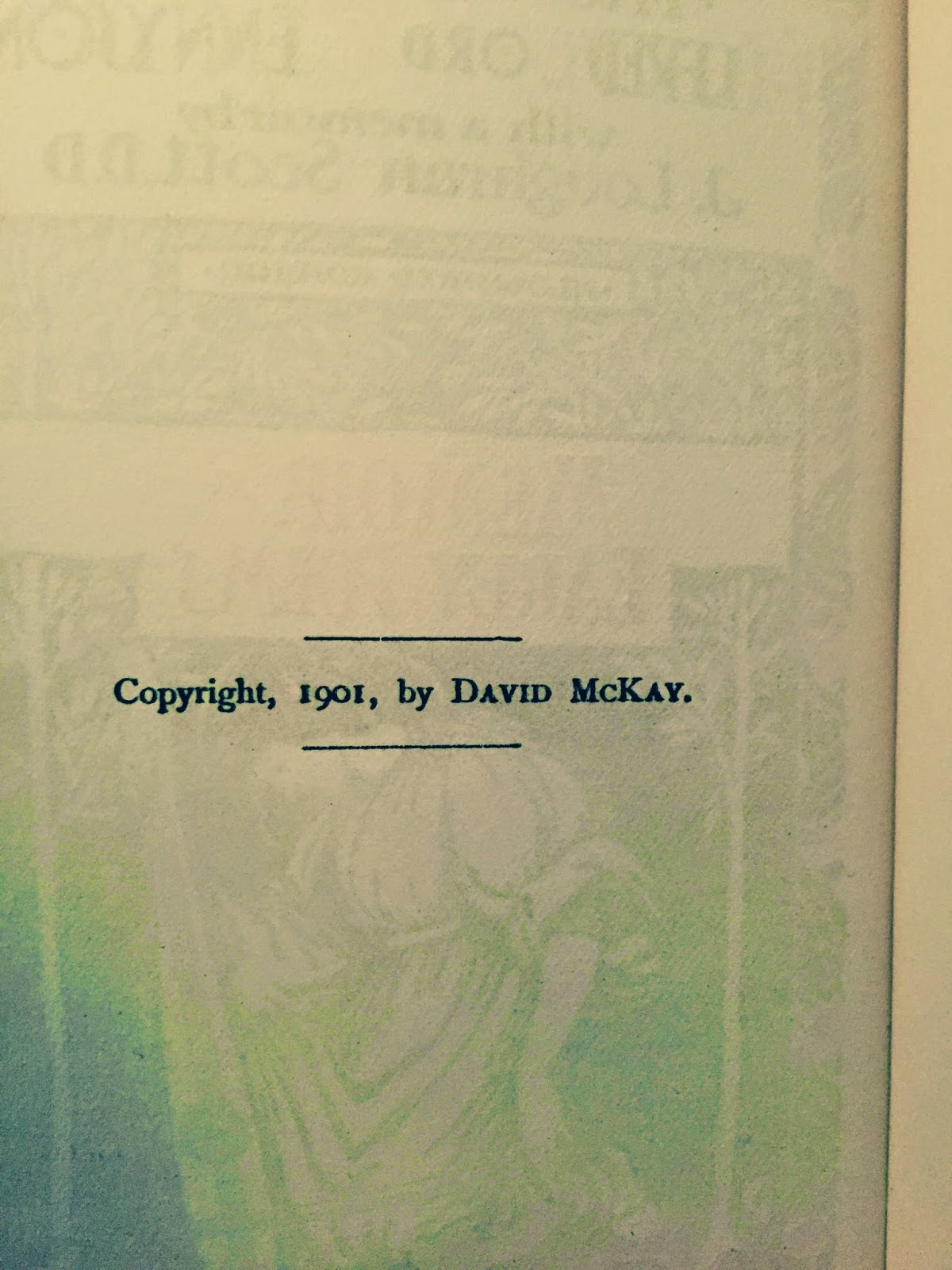 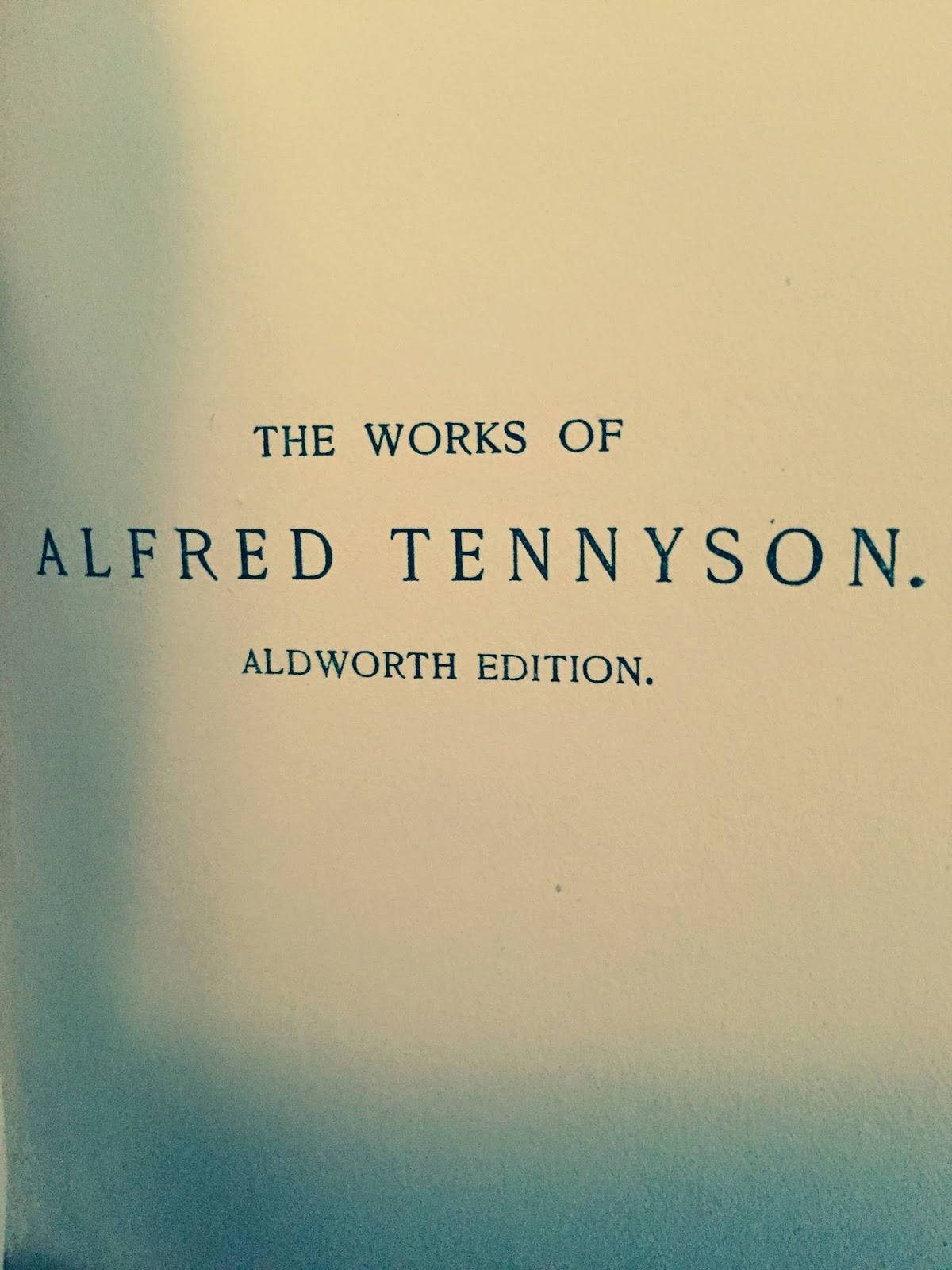 Posted by Unknown at 3:04 PM No comments:

Another treasure from McGahern books. A Shakespeare collection from 1864. Great condition for its age. 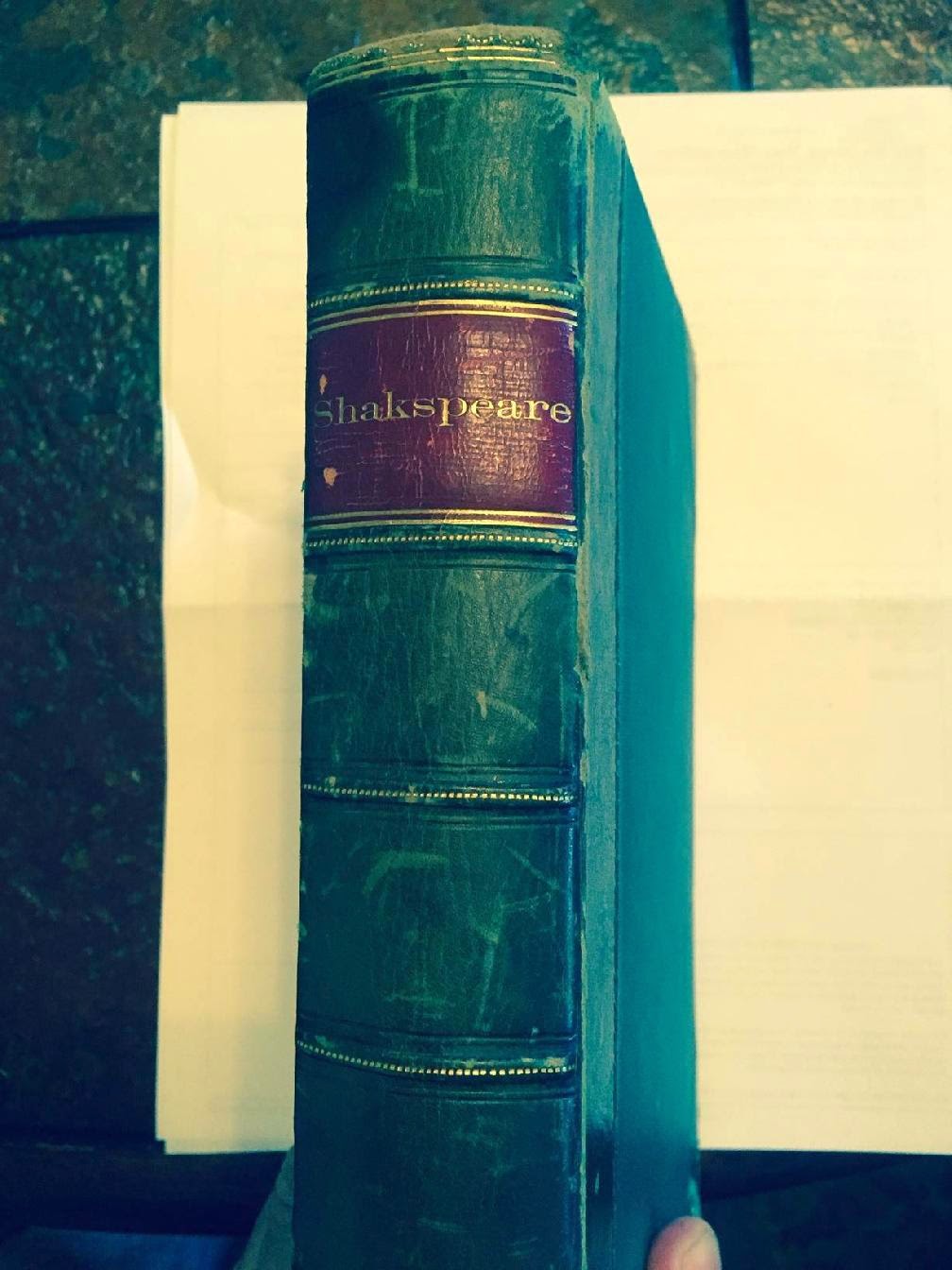 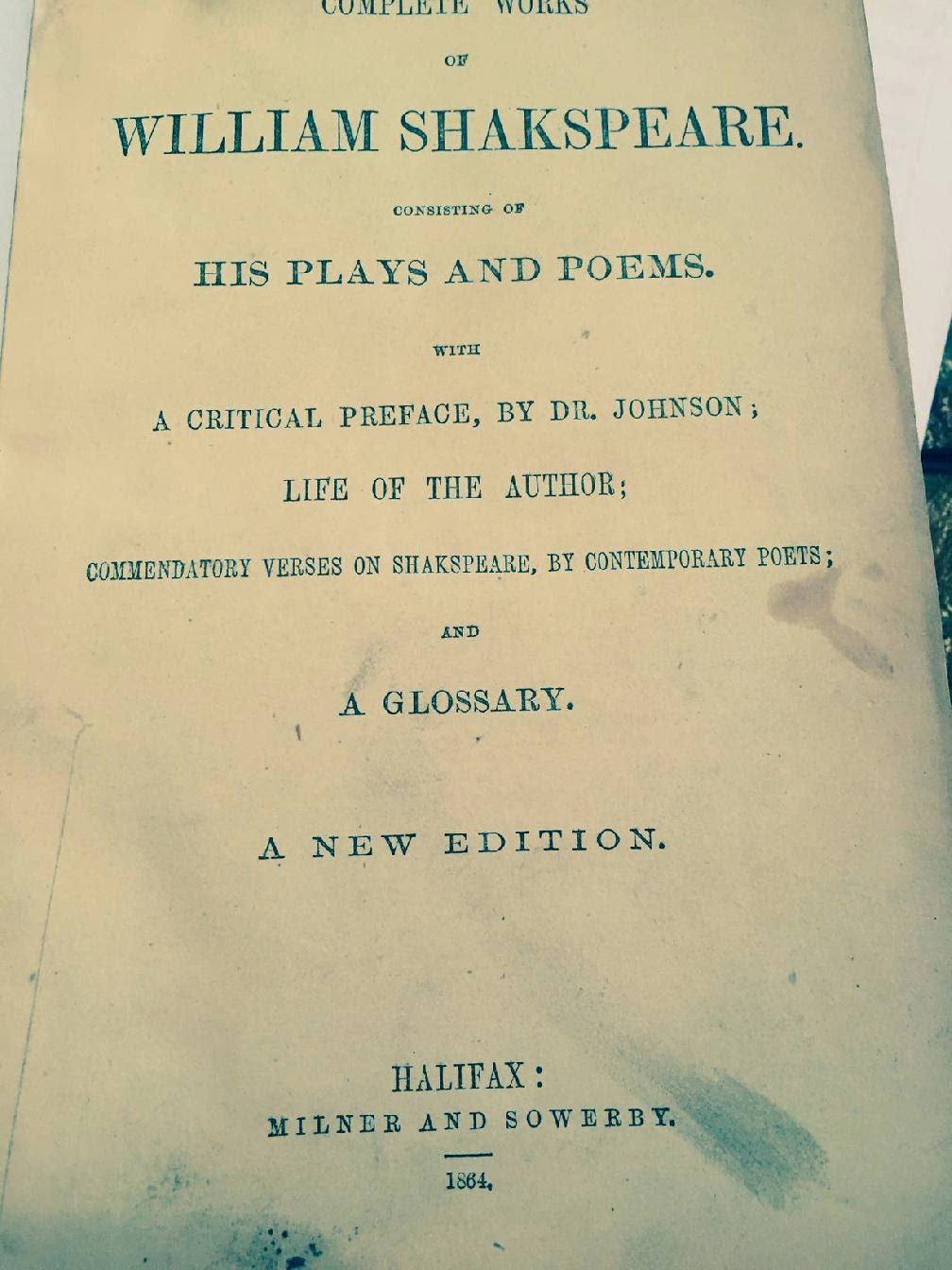 Posted by Unknown at 4:39 PM No comments:

Aaaaaaahhhhhhhhhhhhh. What a day for a book-geek! I found my new favorite book store.

I had some time between appointments today in downtown Ottawa and visited small used book store on Laurier east of Dalhousie. A nice small store with a friendly owner, but most of the stock was relatively contemporary. Nothing wrong with that, but when I mentioned to the owner that I was looking for some older editions he suggested I try a store called "Patrick McGahern Books". I visited the store and it was worth the 3 story climb to their shop at the top of 368 Dalhousie Street. 613-230-2275.

The entire store is antique and specialized used and rare books on every subject. I made a B-Line to the literature section and lost myself for an hour thumbing through nothing that looked younger than 50 years. And yes, I smelled every book. ;-)

I had to limit myself or my wife would want to know why I mortgaged the house to buy old books... so I ended up settling on 2. Milton's poetry and a Shakespeare collection.

The Milton poetry book is "estimated" to be from 1850. I found this interesting when I spoke to the gentleman who helped me told me how they date a book that does not have a date printed in it. They go by the paper used, the quality of the book, the name of the publisher, and other factors to estimate a date. They can tell by the name of a publisher for example, if that publisher has records (which they do) on when they published an edition even if it doesn't appear in the book itself. So the company records show they printed one edition of a work in a certain year.

Either way, its cool and I like Milton, so its neat to hold a book of one of my favorites that was 110 years old before I was even born. 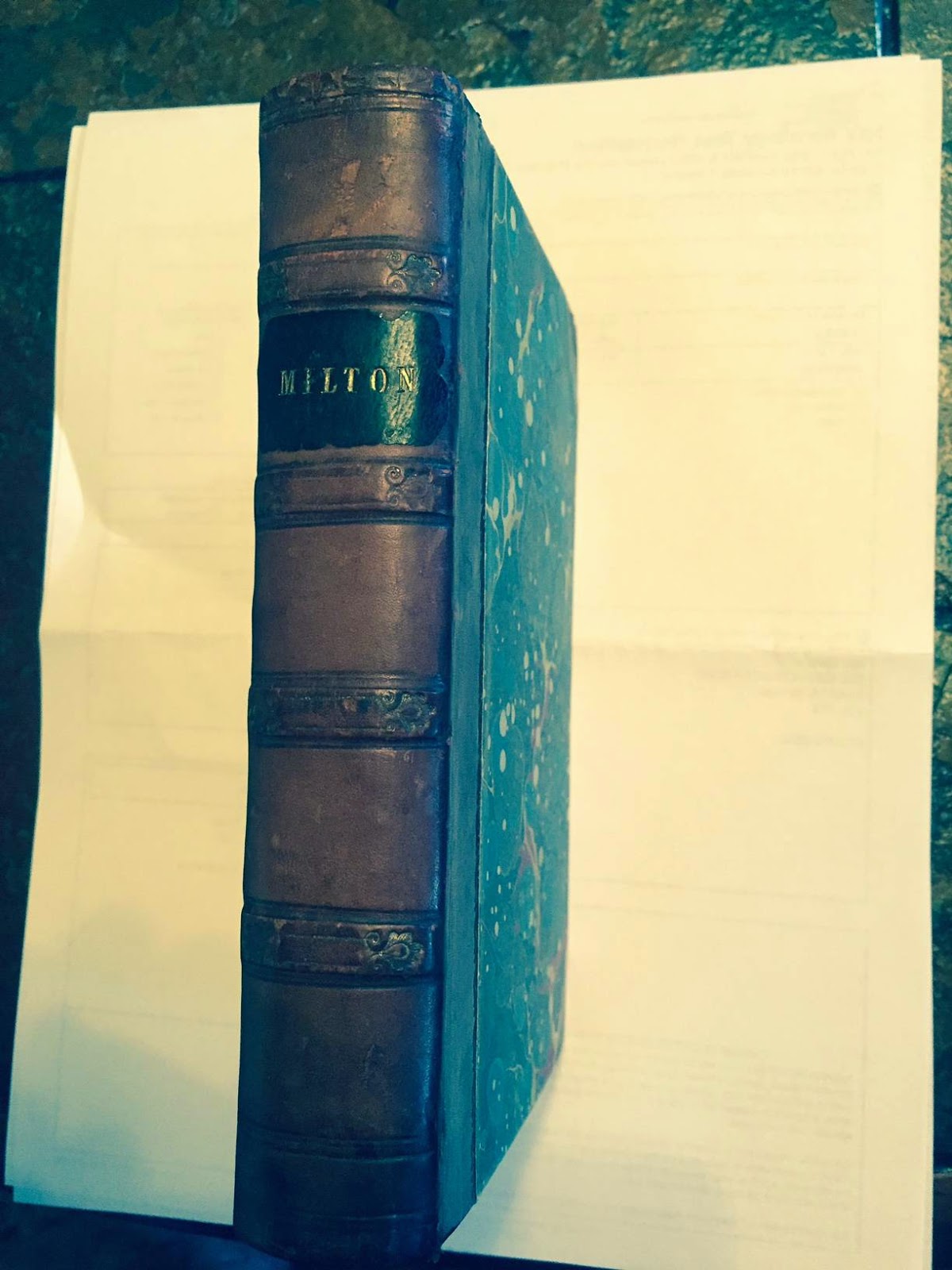 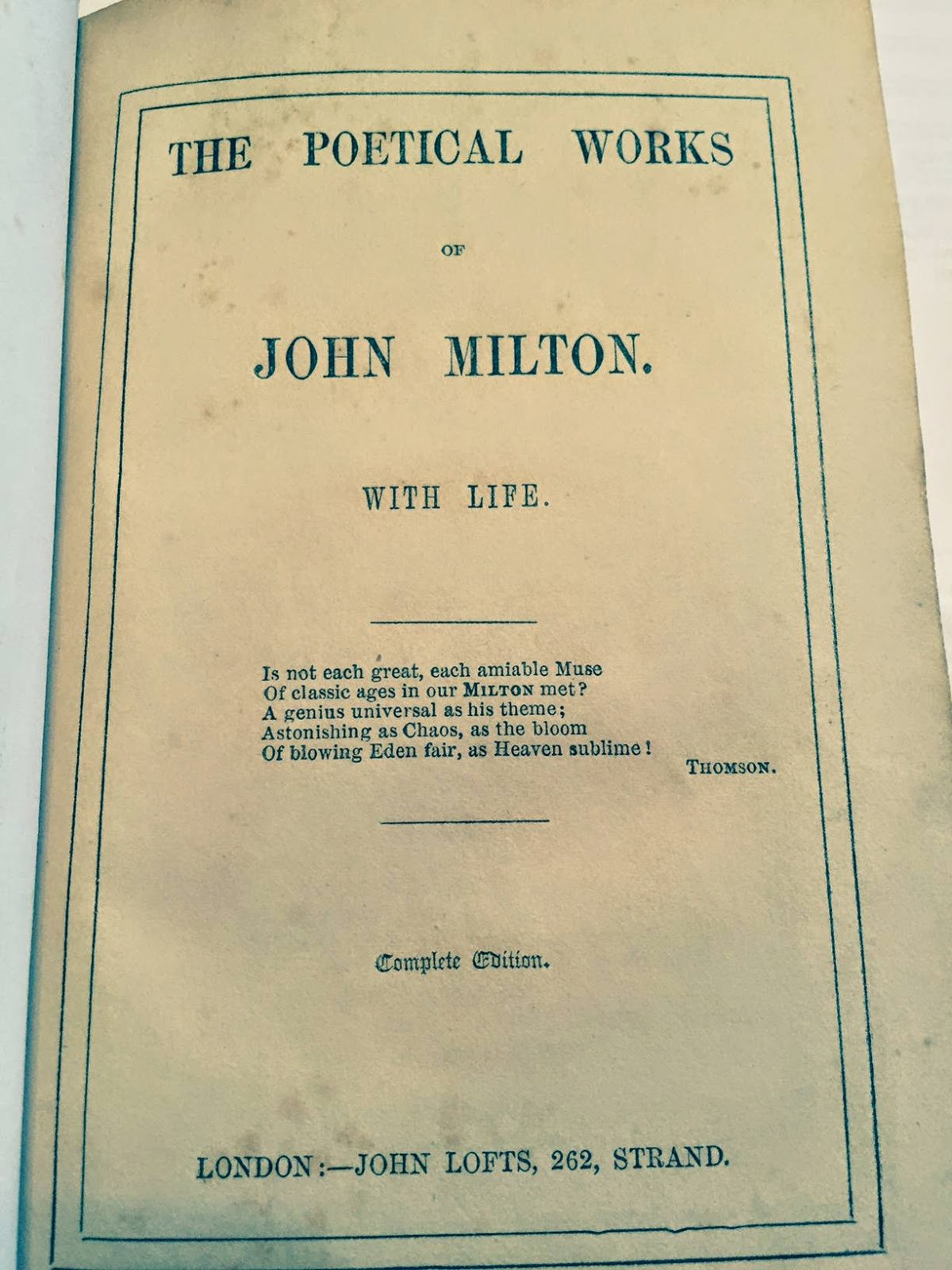 Mr. "Robert Humble Newcastle"﻿, if you're still alive and enjoying the ripe old age of 165, please contact me so I can return your book. ;-) 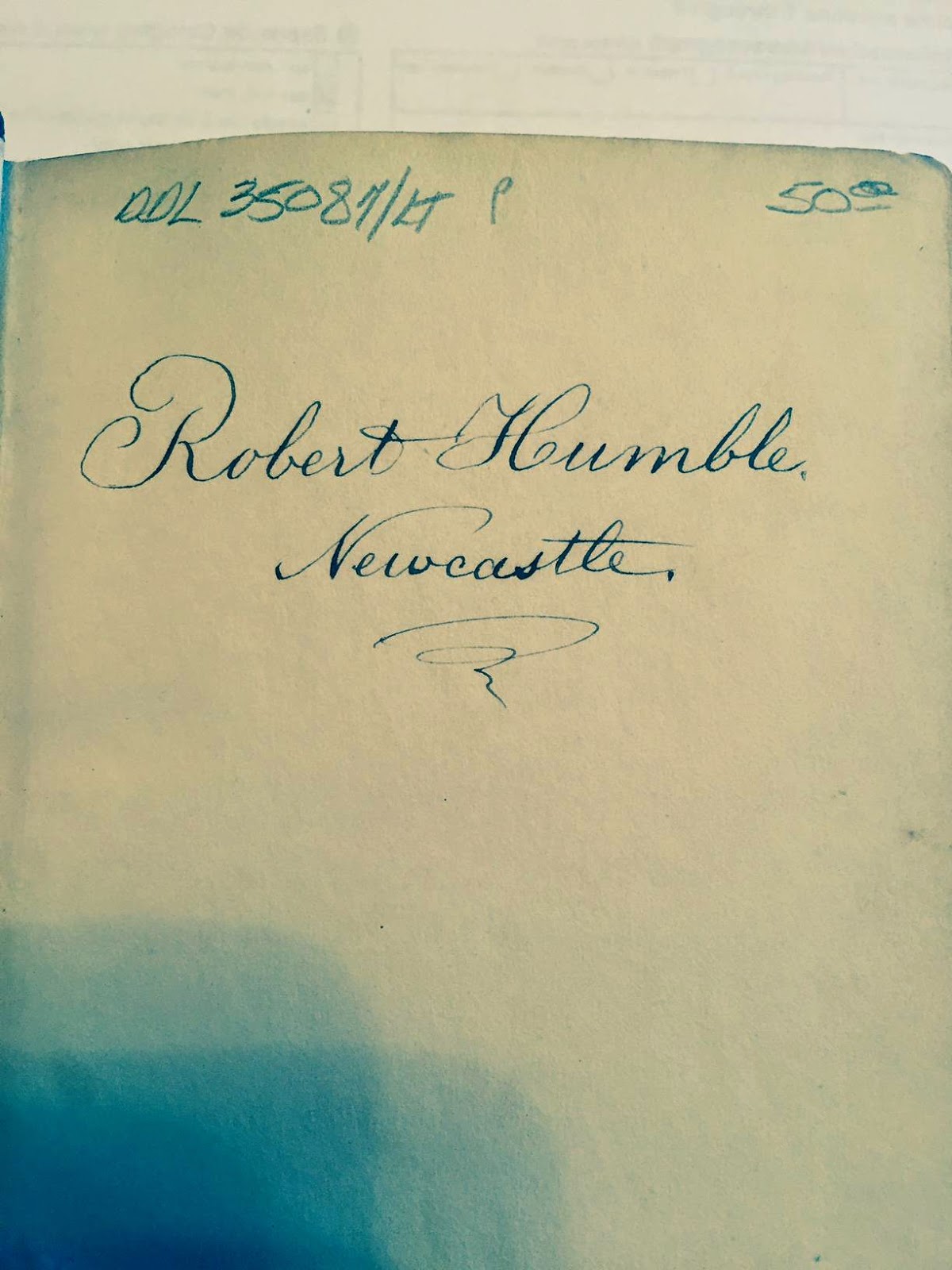 Posted by Unknown at 4:26 PM No comments: