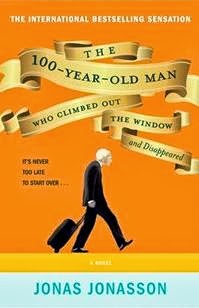 The 100 Year Old Man Who Climbed
Out The Window and Disappeared
by Jonas Jonasson.

From The Publisher:
The international publishing sensation-over two million copies sold. A reluctant centenarian much like Forrest Gump (if Gump were an explosives expert with a fondness for vodka) decides it's not too late to start over . After a long and eventful life, Allan Karlsson ends up in a nursing home, believing it to be his last stop. The only problem is that he's still in good health, and in one day, he turns 100. A big celebration is in the works, but Allan really isn't interested (and he'd like a bit more control over his vodka consumption). So he decides to escape. He climbs out the window in his slippers and embarks on a hilarious and entirely unexpected journey, involving, among other surprises, a suitcase stuffed with cash, some unpleasant criminals, a friendly hot-dog stand operator, and an elephant (not to mention a death by elephant). It would be the adventure of a lifetime for anyone else, but Allan has a larger-than-life backstory: Not only has he witnessed some of the most important events of the twentieth century, but he has actually played a key role in them. Starting out in munitions as a boy, he somehow finds himself involved in many of the key explosions of the twentieth century and travels the world, sharing meals and more with everyone from Stalin, Churchill, and Truman to Mao, Franco, and de Gaulle. Quirky and utterly unique, The 100-Year-Old Man Who Climbed Out the Window and Disappeared has charmed readers across the world.

An enjoyable book that came at the recommendation from a friend at the Ottawa Book Club. The club had been reading "Water for Elephants" when the friend commented that this book had some common elements I might enjoy. And she was correct! Old men reminiscing on their past exploits, trying to break free of the old folks home, even an elephant! Overall what I classify as a "fluff" read. Nothing too deep and can be quite a bit of fun if you don't take it too seriously.

I decided I liked the humor in this book when I reached page 16 and read this about a character who lost his father:

"Shortly afterward his father was swallowed by the bog when he tried to rescue a heifer. Julius grieved over that too - because he was fond of the heifer."  P 16.

Allan Karlsson is a likeable character who is often compared to Forest Gump. Maybe Allan is not quite as "simple" as Gump, but in a similar manner he manages throughout his life to literally stumble into situations where he makes friends, or enemies, with many high level world leaders and influential people. Presidents, dictators, spies, even an Einstein. You do have to suspend your disbelief for a bit as sometimes Allan's luck is a little much to swallow, which is where my problem with the book came in. The book, though witty and charming throughout most of the story, starts to trip over itself with all of the famous name-dropping and world-shakers that Allan meets. I found that the more unbelievable the things that happened to Allen were, the more it revealed he wasn't a real/believable character so I began to not care what happened to him.

Though there were some similar elements to Water for Elephants, this book didn't deal as much with the issues experienced by the elderly. Though 100, Allan does not feel much encumbered by his age and in fact leads quite an active life. A few mentions of some aches and pains but no real insights into the loss of dignity that we see with some other characters. Perhaps a little too heavy subject for this story? It is quite light-hearted and had they toned it back just a little with the name-dropping I would have likely given it a 9.

Chris
Posted by Unknown at 2:59 PM