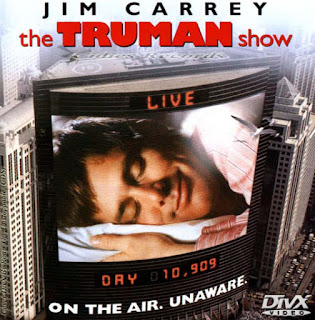 Analysis of The Truman Show


Despite the real-world promotions and advertisements that almost "give away" the secret that Truman is actually supposed to be living in a reality television bubble, I believe what we are actually seeing is Truman slowly descending into mental illness.


I'm not an expert on what type of mental illness he is suffering from, I'll leave that to someone else, but I believe I can show examples of what I believe is truly going on behind the scenes of the Truman Show.


A cautionary tale concerning the paparazzi and our obsession with fame and reality TV? A man who is battling mental illness? Or a man who is struggling and finds God at the end as his savior?


General thoughtsTruman lives a sad pathetic do-nothing life. His delusion is literally the manifestation of a man whose life is not worth watching, believing that he actually is important enough that the whole world watches and hangs on his every move. This fantasy gives his life purpose and meaning. His psychological scarring to prevent his leaving the island is now not his fault. It was imposed on him by his handlers, so instead of being a suffering loser he is an abused martyr.


Specific Arguments
In the end, whatever you think of Truman, he leaves us with his signature geek-catchphrase. "In case I don't see you, good afternoon good evening and good night". I see this as an optimistic line. It means that whatever has happened to Truman, whether the whole movie is literal and he has proven all his paranoia as real, or he is suffering from mental illness and manages to beat it at the end, it means he is going to stay the same essential person and not be changed by his experience which is a brave stance. He's not bitter, he's not resentful, he doesn't threaten legal action, he's just a nice guy and is going to stay that way.

The Interesting thing is that once Truman "leaves" his show, if this would happen in the real world, he would achieve instant wealth and fame and be put under another microscope as the famous are today. Perhaps less invasive as the one in his bathroom but not far off.
Posted by Unknown at 5:18 AM