Man and Other Natural Disasters

Man and Other Natural Disasters
by Nerys Parry. 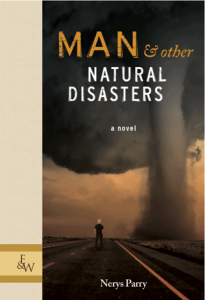 From The Publisher:
Simon Peters, a bookbinder full of theories on everything from heart-broken shrimp to the consciousness of DNA, is hiding from his horrific past in the basement of the Calgary City Library. Enter Minerva, a twenty-two year-old student. Her ghostly resemblance to Simon's dead sister compels him to slowly reveal the shocking story of the various natural disasters that killed his family. But Simon's story does not add up. When he finds Minerva bleeding on his bathroom floor, he must conquer the tyranny of his own memory and confront what really happened that summer of 1962. But the truth proves no less confounding, or tragic, than the original tale.
_________________________________________________________

8.5 out of 10.
Man and Other natural Disasters is the first book from Ottawa author Nerys Parry. I was introduced to Ms. Parry through a Toronto based publishing agent. Living in Ottawa, Ms. Parry was kind enough to visit the Ottawa Book Club to discuss her book in 2012. Unfortunately, the discussion was nowhere near as large as it should have been due to one of the biggest snow storms on record hitting on that same day! But she made the trek and was kind enough to sit in with other adventurous book lovers to discuss some of the ins and outs of her book as well as writing in general. An interview with Nerys Parry can be found here.

An excellent read and would highly recommend this book. Nerys Parry's style is concise, fast-paced and her characters are honest and believable. The life of Simon Peters is revealed to the reader throughout the novel.... or is it? What is the nature of truth? How can we believe what we are told when we can't even trust the nature of our own memories? As I was drawn into the life of Simon Peters I had to find out more about him and find out what was either the "real truth", or simply another step on his journey to find it?

What I enjoyed most about this book was how it challenged my own sense of memory and self. Simon believed his own history even though it began to unravel in front of him. How would someone be aware of it if their own mind altered their own memories to protect itself? Almost "matrix-like", I enjoyed having my self challenged to authenticate my own experiences and memories.

The book also holds a special place for me as Ms. Parry was the first author to come and speak to the then-just-newly-forming book club, and I now own a signed first edition!! Which for a book-geek is like treasure.

Is there anything about the book I didn't like? Sometimes I don't object when authors put a nice fine point on some of the sub-text of their work. One of the reasons this book sticks so much in my memory is that I was able to meet the author with my list of questions and hear her directly explain a reference I missed, or a symbol I overlooked. For example, the main characters name is Simon Peters. Both "Simon" and "Peter" are biblical fishermen. This links well with the theme of water and fire from the novel, but I would have missed it entirely had Ms. Parry not been there to point it out. Not every book has the added bonus of having the author explain what they meant by their content.

Anxiously awaiting more work from this author!
Posted by Unknown at 2:49 PM